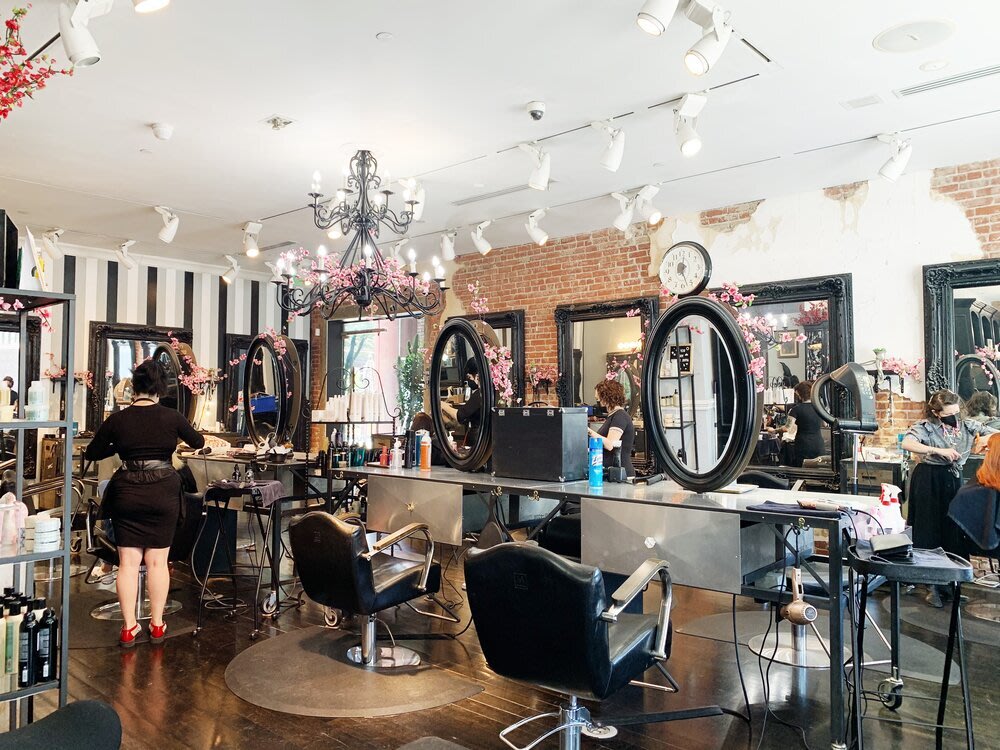 At Boulevard, we’re fortunate to work with some of the most innovative and exciting brands in the beauty business. They inspire us, and by sharing their stories, we believe they’ll inspire you. Look for more about our partners in future Boulevard Spotlights.

Hairroin Salon strives to treat every client like a celebrity, from Hollywood stars to local Angelenos. With a service menu that includes both hair — cuts, color, chemical treatments, extensions, styling — and nails — manicures, pedicures, gel sets and overlays, nail art — Hairroin has positioned itself as a one-stop shop for the fashion-forward Los Angeles community looking for a “beauty drug” with a decidedly “un-salon” vibe.

When she founded Hairroin in 2005, Janine Jarman wanted to use cosmetology to empower her clients with radical self-confidence. Jarman knew hair was her calling as a teenager growing up in Huntington Beach, California, and after graduating from cosmetology school she quickly developed a reputation as a leading stylist to the stars. Her work as the key stylist and official hairdresser for The Pussycat Dolls inspired stars like Christina Applegate, Britney Spears, Lil’ Kim, and Carmen Electra to come knocking on Jarman’s door.

Although Jarman cut her teeth doing celebrity hair, she didn’t let it get to her head. Hairroin’s motto is “Don’t suck,” and the un-salon concept is about providing “high-end hair without the high-end attitude,” Jarman told Mane Addicts. “We want Hairroin to be a place anyone can feel comfortable coming to. We put our clients first and are dedicated to providing personalized attention to the fashion forward and service-oriented client via absolute mastery of hair art and all its intricacies.”

Although Hairroin went hard on the edgy branding (their design is all black, white, and skeletons and their business cards are toe tags), Jarman says their clientele isn’t necessarily an edgy bunch. Punk rock vibes represent Jarman's personal aesthetic, but at the same time, Hairroin’s branding also communicates a specific point of view that differentiates them from the sea of salons in Los Angeles.

In 2010, Jarman joined the season 3 cast of Shear Genius to expand Hairroin’s reputation and introduce the salon to an even wider audience. On the Bravo reality series, 12 stylists compete to win $100,000 and a chance to style hair for Allure Magazine; Jarman came in second. Soon after that season, she took Hairroin’s west coast vibes bicoastal by opening her first New York salon in historic Herald Square.

Since the pandemic, Jarman has returned her focus to the LA community that first inspired her to become an entrepreneur. “I am a hairdresser through and through, and I love hair,” Jarman said in an interview with American Salon. “I am passionate about creativity and business living together.”

Today, Hairroin Salon’s team of 15+ stylists count Florence Welch, Tommy Lee, Kylie Minogue, Danica Patrick, and Fergie among their celebrity clients. And in the anti-snob “un-salon” tradition, Hairroin welcomes anyone and everyone who is self-proclaimed hair-obsessed. The stylists on the team are world-class creatives with the technique to match, and they give back to the industry through Hairroin’s education and professional training programs.

Jarman believes in leading by example; by holding her team accountable and encouraging them to be career-focused, she hopes to move the entire industry in the direction of more sustainable, positive careers that leave stylists feeling cared for and inspired for the long haul. “How do we debunk this philosophy that hairdressers don’t save?” Jarman asked in her American Salon interview. “No, au contraire, I have people that put into a Roth IRA every paycheck, and have health insurance, and we’re working as a company to offer things like that and make it easier and make it more seamless.”

To learn more about how partnering with Boulevard helped Hairroin Salon streamline the day-to-day of bicoastal salon management, read our case study about them.