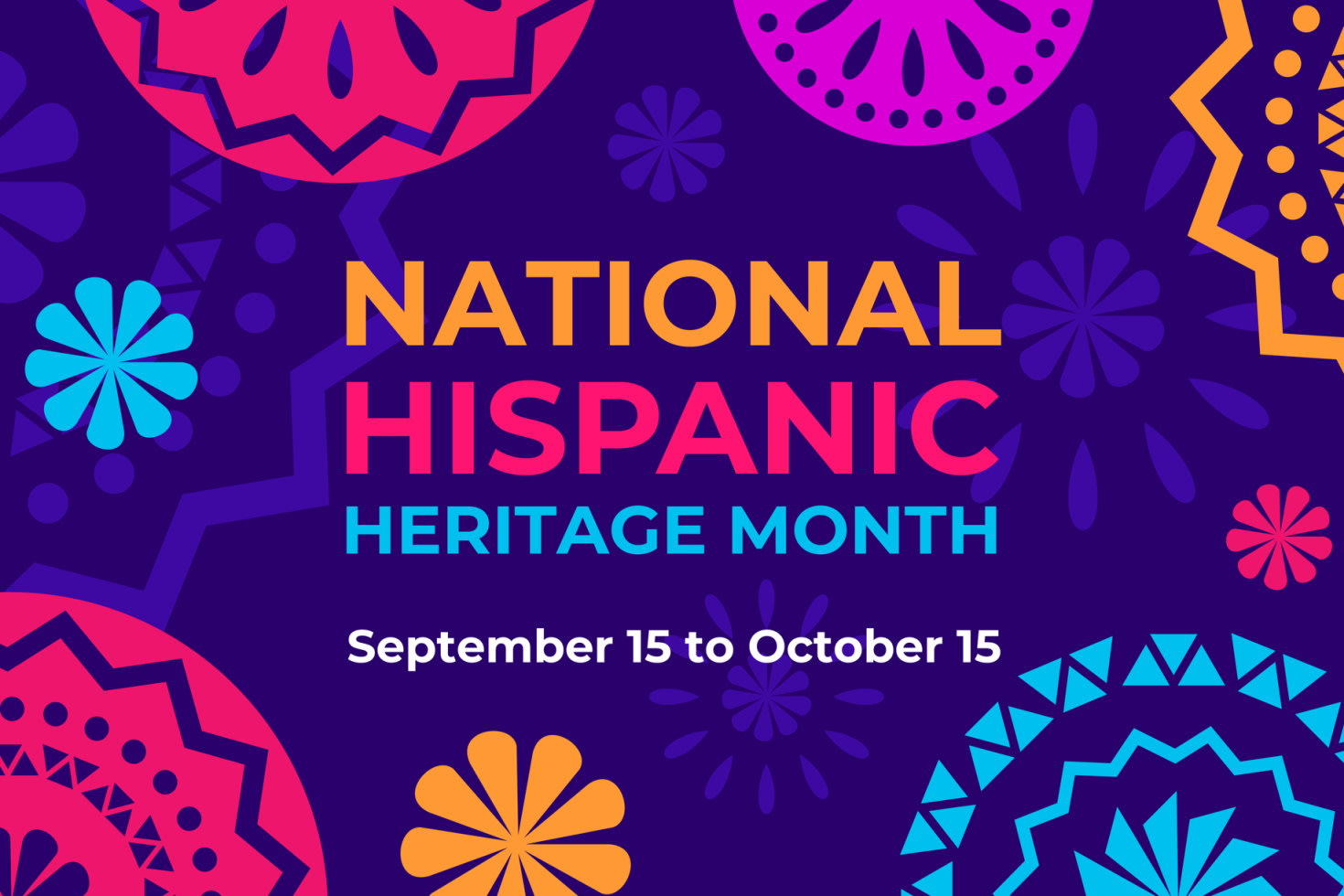 Hispanic Heritage Month is almost here, so let’s take a look at some of the community’s best influencers.

Hispanic Heritage Month is here, kicking off on September 15 — the anniversary of independence for Costa Rica, El Salvador, Guatemala, Honduras, and Nicaragua — and running until October 15. The 31-day festivities are a time for Latiné communities to celebrate their heritage, with a jam-packed schedule of cultural events planned to highlight the community’s contributions to the nation’s history.

Modern advocates for Latin American culture have also had a major impact on its visibility and understanding, shedding light on a group that traditionally has been under-represented in pop culture. Here are 31 Latiné influencers that have played a particularly important role in the movement, and why you should follow them.

You’ll notice that not everyone on this list is a beauty influencer. That’s because there’s a lot of value in expanding the scope of Latiné content that you watch. Not only does it help you empathize and connect to your clients when you know what they’re into, but the Latiné community is producing incredible stuff.

Before you read the list, let’s talk about some evolving terminology.

Both Latiné and Latinx have risen as genderless terms for Latin Americans (as opposed to Latino/Latina), but there’s been a lot of debate about which term is correct. Advocates for Latiné believe that Latinx doesn’t honor Spanish pronunciation, which gave rise to its popularity in the late 2010s. People are increasingly self-identifying as Latiné, many citing the difficulty some have pronouncing Latinx and that many older immigrants in the United States are unfamiliar with the term.

Amara Que Linda is a Colombian influencer known for her vlogs. The social media star has amassed more than 17 million followers on TikTok, where she regularly posts beauty and dance videos. Linda also has a substantial YouTube following, where her vlogs and shorts show off more of her day-to-day life.

Germán Garmendia’s YouTube channel HolaSoyGerman kickstarted his influencer career, but he has since stopped uploading videos to the platform. Instead, the Chilean comedian and musician has maintained an active presence on other social media platforms, like Instagram, and won multiple awards for his content creation.

Salice Rose has become an icon for her comedic videos on Instagram and TikTok. However, the Peruvian social media star has also earned a reputation for her down-to-earth attitude, which has helped grow her career.

Fans of Venezualen YouTuber Marialejandra Marrero likely know here better as Mariale. The YouTuber has a total social media reach of more than 27 million followers between YouTube, Instagram, TikTok, and a smattering of other platforms. In 2016, Mariale received the Cacique de Oro award for best Venezuelan influencer.

Adam Martinez, better known as AdamRayOkay, has become a viral influencer thanks to his portrayal of Rosa, an outspoken diva character that has grown beyond Martinez’s expectations. Rosa has become an important part of the influencer’s identity, so much so that he no longer considers Rosa a character, but a version of himself on an “elevated level.”

Fashion, DIY, and beauty are key parts of Bethany Mota’s content haul. The Mexican-Portuguese influencer has expanded her reach in recent years, landing her own fashion line with Aéropostle and dabbling with music.

Born in the Dominican Republic, Massy Arias has become an icon of the fitness industry. Arias’ MA45 Warrior Challenge has helped her followers develop healthier diets and lifestyle habits, which helped pull her out of her own slump.

Known as “Crafty Chica” on Instagram, Kathy Cano-Murillo is an author, influencer, and artist. Cano-Murillo’s goal is to inspire women and elevate Latine crafts, taking issue with how infrequently culturally accurate craft supplies are represented in mainstream stores.

Honduran influencer Ana Alvarado, also known as Lipstickfables, has earned a reputation for her lifestyle and comedy videos, which showcase life in Honduras. Alvarado is most well-known for her beauty videos and TikTok presence, where she has over 2 million followers.

Are you looking for some stunning videography to spice up your feed? Look no further than Alfredo Flores, a Puerto Rican director, videographer, and photographer that has worked with the likes of Ariana Grande and Justin Bieber. Throughout his career, Flores has earned awards for directing and making music videos, earning a significant following in the process.

With a background in bodybuilding, fitness, and modeling, Michelle Lewin has had an expansive career. She first immigrated to the United States in 2012, and has reached levels of global acclaim. She’s even been featured on 30 magazine covers.

Tech YouTube has mostly been dominated by men, which is what makes Krystal Lora’s work in the tech enthusiast space so interesting. Lora has a ton of interesting tech content on her channel, offering tips on the best new gadgets and updates for phones, laptops, and more.

Alondra Ortiz, or alondradessy as she’s known on Instagram, has made strides in the beauty industry, creating The Lash Bar and amassing more than 2.2 million followers on social media. Her followers can also catch her on the YouTube channel Alondra & Elsy, which she runs with a friend.

Dulce Candy is a meditation teacher, YouTuber, and Instagram influencer that has made it a mission to help her followers live more fulfilling lives. Candy has been creating YouTube content since 2008, but walked away from her original channel to start Sweet Soul, which covers spiritual journeys and introspection.

Better known as Katleen Lights, Kathleen Fuentes is a popular beauty blogger. Amassing more than 3.5 million subscribers on her channel, she’s made beauty more accessible for many of her fans through her tutorials. Fuentes has also earned some acclaim for her personal vlogs.

Pam Arias is the founder of The Girl From Panama, a popular blog dedicated to highlighting beauty and fashion advice. Arias also has a YouTube channel and Instagram following, where she shares updates on her travels and daily life.

Diego León’s men’s fashion blog Dandy in the Bronx is an incredible place to get inspired for bold, but classic, looks. Covering everything from tech to fitness, Léon’s creation is a great resource for everyone. Plus, León knows how to flex his geeky side, as he’s also a prominent Pokémon content creator.

Lele Pons’ career stretches all the way back to the days of Vine (RIP). Since then, Pons has amassed more than 17 million subscribers on YouTube and has been the star of the YouTube Original series The Secret Life of Lele Pons.

Maiah Ocando has earned a reputation as both an influencer and an actress, with a background in both fashion design and filmmaking. On top of that, Ocando has won several Streamy awards and published a collection of six books based on the Visto Bueno series.

You probably caught Nathan Apodaca’s first-ever viral video back in 2020, when he uploaded a video of himself skateboarding, drinking cran-raspberry juice, and lip-syncing to Fleetwood Mac. The video earned millions of views and catapulted Apodaca into internet stardom, and he continues to make content today.

José Rolón, also known as @nycgaydad, has amassed a significant following for his content, where he highlights the LGBT community and shares “gay dad jokes” with his kids. He also shares content with his children, who feature prominently on his channel.

Mariand Castrejon Castañeda’s fans probably recognize her by her channel name, Yuya. Yuya is a beauty influencer with millions of followers and was one of the female YouTubers to join the United Nations’ Sustainable Action Campaign to tackle gender inequality.

Ana Regalado has been spicing up her followers’ TikTok feeds with delicious meals. Her account, saltycocina, has garnered her 2.5 million followers — and for good reason. Regalado’s cooking content shows that classic Latin American food is an excellent option for home cooks everywhere.

Ada Rojas runs the beauty/business blog All Things Ada. The blog covers Rojas’ day-to-day as an entrepreneur, while her YouTube channel is centered around beauty dips. Rojas puts her Dominican heritage on display proudly, tying her cultural background into her work as she tries to conquer the concrete jungle.

Luis Fernando Flores is a popular gaming YouTuber and streamer who leans into comedy to engage his audience on his channel Fernanfloo. Flores’ ability as an entertainer has earned him an incredible 45 million followers.

LeJuan James has become one of the most popular influencers out there, using comedy to shed a light on his Hispanic heritage. The comedian has millions of followers across social media channels and published the book “Definitely Hispanic” to showcase the culture’s values and traditions.

Formerly working for Refinery29, Thatiana Diaz is now the editor-in-chief of Remezcla. While she may not fit the traditional definition of “influencer” Diaz’s work has been instrumental in shedding more light on Latin American culture.

If you want some fashion inspiration from the man that dresses Kylie Jenner and Cardi B, you should be following Bryan Hearns. Hearns knows how to make a statement with his fashion designs, and that’s reflected in how high-profile his clients are.

A TikTok rising star that has published heaps of lip sync content, Miguel Pena covers a ton of topics, including astrology and gender issues. They’ve found a lot of success on social media, building a following of more than 3 million.

Sai De Silva has an impressive resume in both marketing and being an influencer. She launched Scout the City, a blog that has captured the attention of major media outlets like Today and the New York Times. On top of that, she’s a fashion savant that can fill your feed with outfit inspos.

There’s really no reason to ever stop celebrating Hispanic heritage, but this is a great time to add a few new influencers to your social feeds. If anything, it’s a great opportunity to learn how to build a personal brand and advertise yourself to the masses. And if you need more help, give Boulevard’s Brand Building Guide a try.

Elevate your brand with the first and only modern platform purpose-built for appointment-based, self-care businesses like yours. Get a demo now to learn more